The Resistive Load vs. the Drift 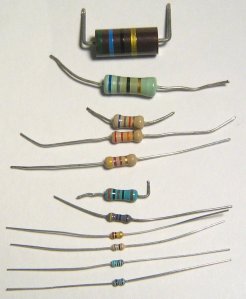 As I said earlier, I recently went to a BigIvyLeague University to give a talk, and I met with a group of young scientists – men and women – for lunch. The meeting turned into a mentoring meeting, as any meeting I have with young scientists tends too. As I said, there were two women postdocs, and we were discussing women’s issues. Another part of the conversation was about the impediments to advancement for women. Different people experienced the resistance at different stages, and this is normal since no two people’s trajectories will ever be exactly the same. Of the two women postdocs, one felt that she was being disregarded and put down even in graduate school. The other had a happy experience in graduate school, but was beginning to feel the resistance now as a postdoc. Of my WomanOfScience friends, many did not feel it until they got to a tenure-track job or even until after tenure. Myself, I had an 8th grade math teacher tell me that I could not advance more than a year in math. Perhaps my early exposure to the resistance is why I am so hyper-aware and intent on changing things.

Studies have shown that the glass ceiling for women in academia is at the full-professor level, as I describe and quoted primary research in this blog post. So, despite the onset age of the resistive load, the trend of the resistance, or other personal factors of each woman’s career, the highest resistance comes just at the precipice of really becoming a fully acting, voting, participating member of your department and college making similar wages as your colleagues. More on this issue in future posts, I think.

The main reason why I wanted to discuss the resistive load was because the meeting directly after the lunch, I met with a young, newly hired WhiteMale Assistant Professor. I had met this guy before at a small conference, and I knew he had been a postdoc at the same BigIvyLeague University where I was visiting, and where he was now tenure track. Some BigIvyLeague Universities do this, when the person is truly a superstar, so I assumed that this was the case, although I didn’t know his full record. This guy is young, and he was very open and honest when I asked him about his trajectory. He said that he had not had many other offers or even interviews, and that he was not, in fact, a superstar. The only places he had interviews were places where people already knew him. He said that this was because he had a low publication rate. Of course, BigIvyLeague University knew him, and his postdoc advisor was key to getting him this position. I consider this a gross case of “The Drift” where someone just continues to advance without any forethought or even any real effort. It is kinda like being in the lazy river at a water park. You get pushed forward.

I often see these people who appear to “Drift” in Second Generation Academics, whose parent(s) were also academics. Second Generation Academics are always typically extremely good at what they do, and in the meritocracy of academia  they advance seemingly effortlessly. In actuality, I think they just understand the game intuitively because they were raised in it, but they are good and working hard. Unlike a Second Gen Academic, this guy is an extreme version of a true Drift. He is literally coasting with no cogent plan. He isn’t applying to grants, or really trying to get students. He is trying to get a few more postdoc publications out because his publication record was reportedly slow.

The juxtaposition of this Drifter with the hard-working excellently bright, quick, and enormously put-down women of the lunch meeting was almost sickening to me. I was somewhat in shock as he told me his path and his non-existent plan. I would like to think that the system would weed this guy out, but given how far he has come, I cannot be sure. Being at a place like BigIvyLeagueU helps in so many areas, like getting good students and postdocs, getting grants, and having papers accepted based on BILU’s reputation. And the worst part was that I really couldn’t blame this guy. He is a nice guy. He is an open and honest scientist. So what if his publication record is slow? What boggles the mind is the system, the structure that promotes this guy and denies even better women and minorities the chance to  work in academia at SecondTierStateU without a hope of even getting to a place like BILU. Or, if you do get an offer at a BILU, they don’t have spousal accommodation, so you have to sacrifice other parts of your life for the benefits of BILU. Indeed, several women I met at BILU did just this.

This post has been long and rambling, so I apologize. These thoughts have been kicking around in my head, and I am not quite sure how to approach them to reconcile the fact that excellent women have so much resistive load against them. What do you think? When did you first feel the resistance to your forward progress? Do you know any female “Drifters”? Even the most excellent and well-promoted women I know really deserve it and still suffer from impostor syndrome, self-doubt, and are truly excellent yet still under-recognized. Post or comment here. Remember to hit +Follow for updates whenever I post. I hope to post more frequently now that classes have ended for the semester!