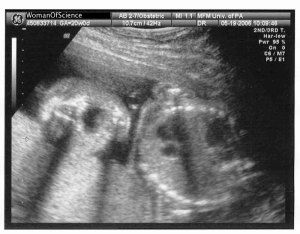 I was recently having an email conversation with another WomanOfScience. She was describing her concerns about getting a tenure-track faculty position. She has a HusbandOfScience, and a one-year-old BabyOfScience, and they will all be on the job market very soon. She relayed a story about how, two weeks after giving birth, she was on the phone with a program officer at a FederalFundingAgency. The baby cried, and she was embarrassed and had her HusbandOfScience move the screaming baby to another room. She felt that the PO might think she wasn’t serious because she had a baby. This made me think of several things:

Would a man with a kid crying in the background have been as anxious about the sound?

People have all kinds of noises in the background of phone conversations. What if a dog had barked? That is annoying, but does owning a dog make you less serious of a candidate?

She was worried that having a baby would make her seem less dedicated, but she was having a phone conversation with a program officer 2 weeks after giving birth! What could be more dedicated?

I think we need to discuss that maternity leave is partially a medical leave! It isn’t just women being hard on themselves. When I was prego as a postdoc, I had two advisors. One was a WomanOfScience who had two kids, and knew that having kids can actually make many dedicated WomenOfScience more efficient and productive. The other was an OldWhiteMaleProfessor who had a stay-at-home wife while his kids were young. When I told him I was pregnant, he was happy. And he said how I was lucky that I had such a supportive advisor like him. This, as I know now, was a red flag.  Anyone who says they are super supportive is probably trying to convince themselves. As the end of my pregnancy loomed closer and my belly loomed larger, he started driving me harder. He would make me stay late – until 9pm to meet with him on a couple of occasions. My belly became too big to actually work on parts of my project. In particular, I was aligning optics, and I noticed the beam shoot across the room because my belly had accidentally moved the mirrors in the front of the optics table. I decided it was getting dangerous to be a fat prego in the optics lab. There was plenty other stuff to do, so I decided to work on other stuff.

One of the other things I was working on was a manuscript. My WomanAdvisor was reading drafts, making edits, and pushing it forward. My OWMP Advisor would not read it. WA said it would be best if I got it submitted before the baby came. I agreed. OWMPA still wouldn’t read it.  He finally read it and said it was ready to submit AFTER I gave birth!

One night I was working late, OWMPA asked me, “What are you doing on your vacation?” I said, “What vacation?” He said, “You know, when you are away.” I said, “That’s not a vacation, its maternity leave.” I was flabbergast. He said that he just wanted to check that I would be working while I was away. This was pretty ridiculous because up to this point, I have had one paper published in a high profile journal, a second that he wouldn’t read, and I already had a job waiting for me at UState, which I was postponing for a year to stay in the lab. In what world would I not come back to work? How could I possibly quit and give it all up just when I was getting everything I wanted?

Further, I have something to say else: MATERNITY LEAVE IS NOT A VACATION! It is a not a leave for fun. VACATIONS DO NOT START BY HAVING YOUR WHOOHA BLOWN OUT OR BEING CUT IN HALF LIKE A MAGICIAN’S ASSISTANT! Maternity leave is a medical leave because you have had a traumatic event destroy your body. It feels like you got hit by a truck, and you can barely move the next day. And, it takes you 6 weeks to physically recover from the experience. So, I hate when people act like maternity leave is anything but what it really is – a medical leave!

Let’s put it in terms an OWLP can understand: If you have surgery for, let’s say, a kidney transplant which cannot be done laparoscopically, and requires you to be cut in half, you would not expect that person to be reading papers and coming into work before the doctor-prescribed recovery time, right? It would be insensitive to expect that person to work, so why is to cool to ask that person to, say, submit a manuscript 6 days after giving birth?

Women: don’t put so much pressure on yourself to act like everything is totally normal right after giving birth. Your husband may be able to go back to work right away, but you cannot because your body needs to HEAL. Don’t be so hard on yourself. Take your leave, get some sleep, and figure out being a mom. The time is really very short, and will not harm your career to be away for 6 weeks. What if you were in a car accident? and had to recover for 6 weeks?