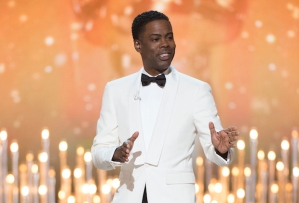 Did you see Chris Rock’s monologue at the Oscars? At the end, he mentioned that there should be black-only award categories. He said there are already arbitrary men/women categories that didn’t need to be there, so why not arbitrary white/black categories? In science, we do have awards that are specifically for women or minorities. I have heard both men and women say that they are dumb to have for various reasons, but I would like to cast some light onto why they are crucially important with a some examples.

Example 1: When I applied and was admitted to graduate school, two different programs offered me little fellowships. One was not specifically for women and was a few bucks to help with cost of living or moving. The other was specifically for women and minority students. The point of offering me these minor pittances was to recruit me to the school that offered the fellowship over other schools. I am not sure if they realized it, but it had a secondary effect. I felt more welcomed at the school.Whether it was real or all in my head, I felt a little special that they had actively recruited me to the school. It helped mollify the imposter syndrome that plagues us all and the stereotype threat that only plagues minorities.

A few years later, I was in a lab and being productive. I was riding to an event with a new male graduate student who was trying out the lab and my female advisor. The male graduate student was complaining that he didn’t get a fellowship or enticement to go to graduate school, and he should have. It “wasn’t fair” that women and minorities get these things when he, a white male, did not. I probed a little further and realized that this guy wasn’t a stellar student. He had As and Bs, but I had a 4.0 GPA. I also asked him if he expected to get into graduate school, and he of course did. I explained that, this was a big difference between the two of us. Despite my 4.0 GPA and my extensive self-driven research experiences as an undergraduate, I did NOT expect to get into graduate school anywhere. When the first school accepted me, it was all I could do to not accept back right away. I had to actively be patient to wait for the others. I got into 6/8 school, but not the two most prestigious/highest ranked schools. My subject GRE was low – average for a woman from a liberal arts school – and many schools look at that exclusively (for a nice article on why that is a terrible idea if you want women and minorities in your programs, click here). I explained to the other graduate student that the purpose of the very tiny award was not to actually reward me, but was to say, “we want you, you’re ok,” when all other cultural signals were pointing to this being the wrong way to take my career. The purpose was to help my self-esteem and make it clear that I belonged in science.

Example 2: Recently, one of my awesome postdocs, who happens to be a black woman in science (sorry to my postdoc, I know you are probably reading this) was informed that she is being selected for a postdoctoral fellowship. This fellowship is specifically for minorities and had other stipulations. First, my postdoc would not read the email. I grabbed her phone from her hand and read it. I handed it back with a casual, “You got it. Why wouldn’t you read it earlier?” I told her to read the email that validated her excellence. And she began to tear up. And I totally got it. I knew why she wouldn’t read it. She was worried about not getting it, and what the blow would do to her self-esteem, which is already (unreasonably, considering how amazing she is) low. She started crying because she did not consider herself good enough or worthy enough for this prize. This award is only for minorities in life science. There aren’t that many. Further restrictions mean that there are very few applicants. That sounds like I am trying to diminish her award, but I am not. What I am trying to say is that, in my mind, there was no way should wouldn’t get this award. But, in her mind, there was no way she would. This award is doing for my postdoc what the tiny graduate award did for me. It is pointing toward the signs that “You belong here.”

And that is why we still, to this day, need minority only and women only awards. Because, despite all the grit and all the challenges, it is still not obvious to the excellent that they belong here. They constantly feel like they are doing the wrong thing because of their gender, their skin color, their weight, their country of origin, their health, etc…

Example 3: Finally, while I was at a meeting recently, my roommate and I were talking about the Society’s fellowships. My roomie successfully nominated some women in her field, and she was aiming to nominate more this year. A couple women protested saying, “I’m not old enough, I haven’t done enough, etc, etc…” These all basically translated into “I’m not good enough,” which is complete BS. If these women were not good enough, no one would think to nominate them. My roomie correctly pointed out that these women needed to win in order to “get out of the way.” What that means is that no other women who is younger will ever be able to win the award or fellowship unless these more senior, more established women get it. When put that way, many of the protesting women caved and agreed to be nominated. Interestingly, these women felt so self-negative that, despite their excellence and despite the call from others to be nominated for that excellence, they didn’t think they were good enough. It was only when the argument was framed as helping others (getting out of the way, so others can have a chance) that they agreed to be honored. Again, women/under-represented groups do not feel they are good enough or will ever be good enough. Society tells us we are not good enough because this is not what women do. I have advocated again and again in this blog to self-nominate and to try to win awards (here, here, here). It is hard to put yourself forward when society’s bar and your own bar are so damn high.

Example 4: I wrote most of this a week ago, but another thing happened just yesterday that also reminded me of this issue in the opposite way. As you know, I am on sabbatical. I have a desk in an office suite for three on a hallway of similar offices. These offices are filled with graduate students, postdocs, and some undergrads. It is close quarters, and I can often overhear the students’ conversations (including one where they were discussing golf and the reward for scoring a hole-in-one, which was to have breakfast at a strip club {I can’t believe that is something anyone would want}). Anyway, yesterday a postdoc in some lab was discussing with a relatively new grad student about his job search. He was so, so confident that he was going to have an offer. He had about 6 interviews, and had heard back early from AnIvyLeague that he was not the top choice. He was confident that he would be hearing from the others soon. They all said the decision would come in 4-6 weeks, and this was week 6. Any second, he would get that call from PrivateSchool or BigMidWestU saying that he was the one. I was pretty blown away by his confidence. Despite having as many interviews and 3 solid offers from pretty good schools, I was never confident that I would get an offer from any of them. I was happy to have been given an interview. I think I performed pretty damned well at most of the interviews, but I never thought they would call me up for sure.

Further, if I am being honest, I didn’t even apply to the top schools. I had the excuse that I had a two-body issue, and I was pretty confident that the spousal accommodation policies were non-existent at these schools. But, mostly, I didn’t apply because I didn’t think I had a snowball’s chance in hell at getting an interview or offer. I may have been wrong about that. In fact, the one IvyLeagueU where I did apply, I got the interview and the offer. I’m not sure if other women held themselves back as I did, but looking back, I wish I hadn’t. I know now that the rejection is minor and hiring has many whims and issues (there are words like “fit” thrown around that are subjective), so I wouldn’t and don’t take the rejection so personally now. I do feel like I have more confidence now, but I don’t think I will personally ever have the level of ballsy self-confidence that I overheard from my office. I’m not sure many other women/minorities would either. How about you?

So, what do you think? Are minority-only awards good? Do we still need them? I don’t personally think we are post-sexism or post-racism yet in science. As Chris Rock says, “Is Hollywood racist? Yes. Hollywood is sorority racist. They’re like, We like you Rhonda, but you’re not Kappa material.” Replace Hollywood with Science, and I think the same sentiment is true. Scientists are nice, liberal people, but they want to hire, work with people who look like themselves. “We want opportunities!” (-Chris Rock). Since the bar is so high for us, winning awards (even ones where no one else is qualified) is important to helping us overcome the self-doubt and the unnaturally high bar of being an under-represented person in academic science.