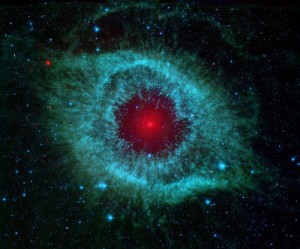 So, are you watching COSMOS? We are. In fact, we are watching it twice each week – once live and once with our kids because they didn’t get to see it (their bedtime is too early). It was fortuitous because our daughter was just asking about where babies come from (she is in elementary school). Since we don’t like to lie to her we were giving her the scienciest explanation we could must with very little information on the dynamics of S-E-X. So, we were talking about DNA with a lot of hand-waving. We were super excited to watch COSMOS after both kids went to bed, and see the DNA illustrated. We were recording it, and are watching it tonight to show the kids. Both kids are super excited about it! I couldn’t be prouder. (We also watched Gravity this weekend, and my daughter thought it was scary but exciting and cool.)

I was also ecstatic because some of the science I work on was mentioned in COSMOS in episode 2! It was awesome to see it illustrated in beautiful graphic arts and brought to life. When it came on while my kids were watching, I ran to the TV, pointed at the stuff I study, and said, “That is the science I work on!”

Also, I find that people are really jazzed and excited about science in general. I do a lot of random science outreach. Mostly, I do a lot of talking about it on airplanes, in airports, in taxis… I’ve been doing a lot of traveling, lately, have I mentioned it? When people sit next to me and ask what I do, they are often excited to learn I am a scientist. I have taken the opportunity to explain some of my science, why it is important to them, and what we could learn. They are often really excited and impressed.

Also, it is a great way for me to learn better ways of communicating my science not just for the public, but also to my classes. Teaching big service courses to hundreds of students is an essential way to make a science-literate public. For some, especially those taking ScienceForPoetsCourses, this may be one of the last times they come into contact with science in a class in college. The experience should be a positive one, and it should make them literate of what science can do for them.

Another place I have been doing a lot of outreach is to my Representative in the U.S. Congress. I have been going for the last several years to a Capital Hill visit day with one of the ScienceSocieties I am a member of. The first year I visited my Rep, I was happy to see that his office had pennants from the universities and colleges in his district. He was taking over our region due to an “ungerrymandering,” so I made sure to bring him a pennant from UState when I went to visit the second year. Mostly, I spent a lot of time talking to his staffer responsible for science, and informing her about how science works. I told her about how federal funding works, which she didn’t realize. I told her how the university only gives a research professor money to start a lab, but after that, we have to sustain it ourselves with outside funding. I told her how we don’t get paid to do research in the summer unless we bring in enough money. I told her that after we figure out how much we need to budget, we multiply it by 60% to determine how much overhead we give to the university. I told her how funding agencies typically still don’t give you what you ask for in your budget, and you get cut and have to make tough choices. Most importantly, I have kept in touch. When I get a grant funded, I email the staffer and let her know. I offer to show the representative around, if he should want a tour of some labs on campus. I offer to help with any science policy issues that might come up. The staffer knows my name and work enough to email me when she sees an announcement that my research got funding.

The next step, in addition to this helpful blog, is to try my hand at OpEds. I tried one, but it didn’t go anywhere. I was told by an expert that it wasn’t personal enough. I actually hate personal OpEds. Who knew I was supposed to like them?

I am not advocating that everyone, especially those pre-tenure write OpEds of even blogs (unless you want to write an entry here…), but emailing or visiting congress and talking science to random strangers is relatively easy and important. I do advocate that we all try to advocate a little more in our daily lives. COSMOS should help. It is easy to strike up a conversation about, “Did you watch COSMOS this week?” Then, you can talk about the stuff that was on there, if and how it pertains to your research, and the significance of the work for human-kind. What do you think? Post or comment. Push the +Follow button to get an email every time I post.