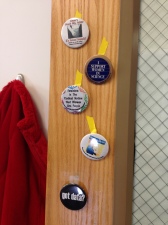 Most harassment is not very subtle to women, but I realize that not everyone is as clued in and keyed up about it as I am. I was recently harassed, probably not on purposed or even pointed directly at me, but I inadvertently stumbled into some harassment, and I wanted to have a little talk about it. What to do, how to report, and make it clear to my male friends and advocates that this stuff is not just annoying, it affects us pretty much daily. So, I am going to post about “subtle” harassment – the pervasive kind that wears you down.

The first time, was in graduate school. I was TAing, and I had to use a photocopier to make copies for my class. The photocopier was in what I call a “party office” where many grad students have desks and work. It wasn’t really a party office in the sense that I never once saw a party or celebration occurring, but it was a “party” more like a “party line” for phone service in the olden days. You might also call it a “grad student ghetto,” which probably better captured the mood of the room. Anyway, this day, like many others, I went in to make my copies. The copier was directly in front of a 6 foot chalk board. This day, I looked up from the copier to see a 3-foot tall, very detailed drawing of a penis. I stopped my copying and went to the department office directly to the chairman, and actually got him to come to see the masterpiece. He actually took me seriously and came to see it for himself, but erased it immediately upon seeing it. He was quite harassed, as well as me. I informed him that it was this type of, well, not subtle, but pervasive harassment that scared women away from male-dominated fields.

Recently, now that I am a professor, a similar situation has occurred. On the chalkboard outside my lab and near my office, the word “penis” was written. This is certainly not as bad as the graphic drawn in gory detail when in grad school, but it is perhaps more troubling because it was drawn immediately next to some drawings my daughter (elementary-school age) had made on the same board. In fact, she wrote the word, “LOVE” and immediately next to it, was the offending word. Nice. As before, I informed the department chair and this time, I also took a picture and emailed it to the UniversityDiversityOffice who is responsible for following up such offenses.

A couple of things occurred to me about these two situations:

1. Why are dudes so obsessed with penises? Why not be obsessed with vagina? It is weird to me. Statistically speaking, some of the dudes in my department are likely to be homosexual. They don’t seem to be out. We do have an openly gay faculty-member, and there doesn’t seem to be overt homophobia in the department.  I could be wrong, but no student has come to discuss it with me.

2. I was surprised about how much more offended I was by the word in the second instance compared to the drawing in the first instance from grad school. I think it was because of the proximity in space and time to my daughter. It pissed me off that they defiled some nice drawings and lovely writings that were clearly done by a child. My child.

3. Finally, in the same note as number 2, I couldn’t help thinking that they had targeted my space in the department. In the first instance in grad school, the picture was in a closed office and was more likely not targeted at me. Yes, there were other women in that office, and they were the likely targets of the harassment, but it wasn’t targeted at me. But, this second version felt targeted because the board is right between my office and lab. That made me feel badly, too.

Everyday Stuff. Last week, there was a particularly horrific situation on the campus at UCSB, and I am sure most blogs dealing with women’s issues are mentioning something about it. The misogynistic rantings of the shooter are worrying to any woman who works in science, particularly some fields that are male dominated. Scary.

One of the topics that was described in the commentary of the “Yes, All Women” trend was women trying to explain that we often feel uncomfortable in situations, even everyday situations, because of the very real threat of men. One of my favorite comedians has a particularly clear view of this idea (See a video here).

After the women comments, there was a backlash with the tagline “Not All Men,” where dudes were trying to say, “Hey we aren’t all like that!” but as many women pointed out, WE CAN’T TELL WHO IS OR WHO ISN’T LIKE THAT. You all look the same to us.

Here’s a hypothetical: Let’s say 1% of men are like that. Now, you are a woman running a class of 400 students where only 20% are women. So, you are in a classroom with 320 men, and 1% are women-haters – that is 3-4 woman-haters are in the room with you.  Not that many, but enough to harass and demean you, if they sought to do so. I have talked to women who have been physically intimidated by male students in classes with these types of numbers. The students physically get into their personal space and demand differential treatment. I, personally, don’t let students get near me. I have a very large personal space bubble. But even so, there are other ways to cause trouble.

Outside of classroom situations, I have tried to notice my reactions to other, regular, situations in the past week. I have noticed that I make certain decisions about myself because of a fear of men. Let me give you two examples.

1. I was at the gym with HusbandOfScience. I wanted to stretch in the area near the mirrors. There were two men in the area – basically taking up all the room in the area in front of the mirror. There was just enough space between them for me to fit, but I didn’t do it at first. Why? I was afraid of them. Not deathly afraid, but wary enough to avoid. I decided that the likelihood that these two guys were both bad guys was low, statistically speaking. I was right. They were fine – just taking up more than their fair share of space, as men often do unconsciously (Not All Men).

2. I was taking my child into daycare. Normally, I park right at the front door, but there wasn’t room, so I had to park half way down. At the far end of the parking lot was a group of men. They laughed when I got my kid out of my car, and it made me sort of flinch. I noticed that I was wary of them. I went to drop my kid. After coming back to the car, I took a closer look, and I realized that they were latino, and that made me feel safer. Statistically speaking, dudes who hate women are white. (Sorry to my white men friends – I realize it isn’t all white men, but stats are stats.)

So, here is my say. The WomanOfScience addition to the #YesAllWomen movement. What do *you* think? Comment or post. Push the +Follow button to receive an email every time WomanOfScience posts.