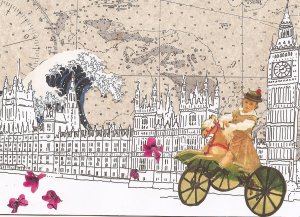 I have two WomenOfScience Friends who just went away got sabbatical with entire family in tow. I have been asking them to write a blog entry about the do’s and don’t’s of going on sabbatical, but it turns out, when you go on sabbatical, life gets really hectic when you get back. Note to self: Life After Sabbatical is rough – try to take it easy.

Anyway, despite the huge amount of work and catch-up, I got one to write a little “report” on reflections on her sabbatical. If you like this blog, push the +Follow button to get an email every time I post.  Enjoy!

My husband and I are both faculty members at the same university. This past year we took an amazing sabbatical for the entire academic year. We called it “Our BIG Year.” We were fortunate enough to both be awarded fellowships that helped to support our sabbatical research. We spent the first half year in Tokyo, Japan. I worked at the University of Tokyo and my husband worked at Keio University. Our two young sons attended day care and kindergarten in traditional Japanese schools where no English was spoken. The second half of our sabbatical was in Paris, France. I worked in a laboratory at the Pasteur Institute and my husband had an appointment at Paris 12th University. Again our two sons attended day care and at that point 1st grade in a typical French school.

For me there were two major concerns going into the sabbatical. The first was maintaining the base I had worked hard to establish in my research group during my first seven years as a faculty member. My second concern was about how my kids would adapt to multiple school situations on two different continents both taught in languages with which they had very little to no experience. I would say that my concerns were appropriate; those were the two major areas that most impacted my sabbatical experience.

When I applied for fellowships and sabbatical, I imagined that I would have a senior postdoc/research assistant professor to act as a stabilizing force in my laboratory while I was away. Due to some unforeseen funding changes, and problems with the visa of the postdoc/research assistant professor, I was not able to have that stabilizing force present in my lab I was gone. I decided to go on sabbatical anyway. Overall, it was a truly amazing experience, and I’m glad that I did it. In case you are considering a “Big Year” here is my list of considerations the next time I consider a sabbatical:

Culturally and personally Our BIG Year was an unparalleled experience for our family. There were so many elements that I loved (the language, the trips around Japan and France, the learning lots of new things, the exciting seminars, the connections on different continents). I am extremely grateful that we had this opportunity and this experience. Perhaps because it was complicated and exhausting and is too fresh in my mind, I am not sure if I would take another sabbatical abroad. Maybe a few years of being back at my home university will change my mind. It is likely that three years from now I’ll be planning another BIG year in some far flung location, but for now, it is great to be home where I can talk to my students casually on a daily basis and my kids can play in their own back yard.

What’s so wrong with sequins?

How NOT to Give a Talk