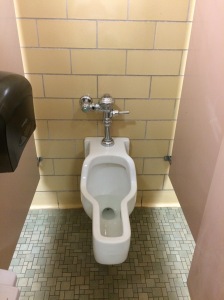 In bathroom news this week, the crazy potties (see picture) have been replaced by regular potties in my building! See my previous post about these crazy potties.

Actually it happened a few weeks ago, and the women in my lab are overjoyed. I was so excited about the change, I made an announcement in my department faculty meeting. I was actually curious as to how the change came about. My department business manager and space manager knew nothing about the change. My chair had no idea. Was it my dean, who reads this blog? If so, thank you!!

At faculty meeting, many of the men were surprised that there were urinals in the women’s rooms. At which point, I tried to explain that they were urinals for women. We even found an advertisement from the sixties trying to say that they were hygienic and women loved them! so they should be installed in all bathrooms for women. This is a great example of why you need women’s voices at all stages and levels: engineers, architects, administrators who make decisions. No woman would even have bought these for other women!

As funny, fascinating, and weird as this conversation was, my bringing this up allowed another faculty to broach the subject of gender-neutral bathrooms in our buildings. With the number of openly transgender students who feel comfortable enough to make the transition in college and grad school, having gender-neutral bathrooms is very important for inclusion and diversity that students have a place to go to the bathroom where they feel safe and comfortable. We were asked about where they were in my building. Thank goodness someone (not me, but one of my white-male allies) knew where they were. I was just happy we had them! Thanks to this faculty member, we were all made aware of the location.

Even better, the location is catalogued on the website of one of our diversity websites on campus, so students can look them up in each building and find them. I used one this week, because I teach on the same hall, and they are the only bathrooms in that part of the building. They are nice – one stall, single sink, outer door that locks.

Next steps: putting up signs to let people know where they are. But, where to put them? On the gender separated bathrooms? Around the building? On my office door? Any comments or suggestions will be greatly appreciated! Post here.

And that is all for the Bathroom News this week! Push the +Follow button to get an email every time I post.